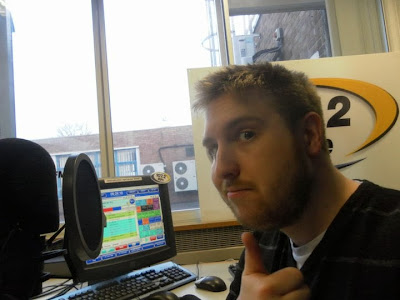 I love local radio.  Here's a younger, thinner, firmer-buttocked version of me in 2010 doing local radio for Kidderminster.  True, I was in a newspaper head office in Telford, but it was still Kidderminster's own.

As a #RadioGeek I forever travel around the dial and love listening to what smaller radio stations are doing.  Every so often a diamond in the rough can pop up on "Ashton-Under-Lye FM" or "Radio Cheam".  Plus these stations have the power to really eat, sleep and breathe the community they serve moreso than the larger networked stations can.

Unfortunately, more often than not, they don't.  But boy do they pretend they do.  They do this by saying "local" over and over again.  I eavesdropped on a small town station that kept telling me that "local news, local travel, local sport and local weather" were all on their way...yet outside of the odd jingle I never heard the actual NAME of the town mentioned at all.

Here's my two pence worth...if you're a local station, you don't need to say local...you just are local.  I had the pleasure of working with a young chap by the name of Dan Haycocks (remember the name...seriously, he's ace!) back in 2011 and I remember we had a very passionate discussion in which he was pro saying local and I was anti.  Hey, we're radio geeks, never said we were cool!  Whilst I agree that repetition is key in radio to re-enforce, I don't think this is something you need to re-enforce.  When somebody asks me where I got my shirt from, I would say "oh, from Primark in town!"  (yep, staying classy) not "oh, from my local Primark."  See what I'm saying here?

Returning to this small town station I listened to...whilst they were constantly saying the "L" word that I dislike, the presenter wasn't doing anything in his show that bolted his broadcast to that town.  He read out bits from the national paper, talked about what was on TV, mentioned something about politics, nothing at all that endeared me - or him for that matter - to the town.  But it's okay because "local news was on the way". I don't think that's enough, personally.

So, for those who are interested in my beardy-weirdy opinion, here's some tips for any local radio presenters to make the content "belong".

Stop saying local: Try swapping local for "our town" "the city" "the region" "our place" or even the name of where you are broadcasting to.  That simple cosmetic change will instantly bolt you to that station's corner of the world.

Make national into local: If there's flood warning across the country, how's the weather in your TSA?  Is your area in the paper today - no matter how small the story?  Maybe exercise some creative licence and if a national statistic says "34% of men in the UK wear socks to bed" you can almost be sure that 34% of men where YOU broadcast to do as well.  Any chance you get to localise, do it!

BE local: In this day and age of "hubs" where your station maybe out of the broadcast area, it's more important than ever to go to where you broadcast to.  Even if it's just to do your shopping, just get a bit of local flavour.  I spent a year hosting a show for Kidderminster that came out of Telford (I was living in Shrewsbury at the time) and I made sure twice a week to pop to North Worcestershire - go to the pictures, do some shopping, meet mates in the area for a drink.  You'll find even if you do nothing you'll find some content based on your TS-Adventure!

There ya go.  Hope that sparks something with you...feel free to further discuss on my Twitter!

I emphasise I'm not an expert...I'm a radio geek with a tongue in my head.
Newer Post Older Post Home
My first radio show was in 1991 on a tape player in the study of my parent's house. Now I host Drivetime on Heart North East.
All the views and stuff are from my own brain and out of my own mouth/hands, they are not the views of Global or any of my employers.

Other Stuff I Wrote...